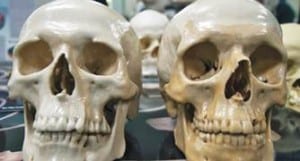 NEW YORK, N.Y., USA: The remains of two sailors discovered during the 2002 recovery of the gun turret of the Civil War-era ironclad ship USS Monitor were interred at Arlington National Cemetery March 8. At the time of the interment ceremony the sailors remained unidentified, but thanks in part to dental clues, researchers are closer to possibly identifying the two men by name, and perhaps ultimately even identifying them in photographs from the era.

The remains of the two sailors are the only remains to be discovered of 16 sailors lost when the Monitor sank during a storm on Dec. 31, 1862, off Cape Hatteras, N.C. The Joint POW/MIA Accounting Command (JPAC), Joint Base Pearl Harbor-Hickam, conducted forensic analysis on the remains in an effort to identify the two sailors who lost their lives more than 150 years.

JPAC staff members who took part in the identification process included a dentist who analyzed the teeth from the remains, with the intent to cross reference them with any dental records that they might be able to find. To date, no such records have emerged, but the sailors’ teeth have revealed other clues that brought JPAC staff members closer to their goal of identifying the sailors by name.

Forensic anthropologist Robert Mann, director of the Forensic Science Academy for JPAC, was assigned to do the skeletal analysis. “The Monitor sailors were really very unusual for us; water recoveries first of all are not that common for us,” said Mann. “To recover remains from the bottom of the ocean that sat there for 150 years is really phenomenal.

“There are a lot of challenges when you are trying to identify someone, especially when you’re just dealing with skeletal remains. If you think about how you recognize somebody, and how we identify people, they identify them by visual examinations,” said Mann. “Look at the face or finger prints, well we don’t have finger prints after 150 years. We don’t have faces, we have bones and teeth.”

One of the challenges faced was the amount of available records from the Civil War-era and when the Monitor sank in 1862.

“We’re talking 150 years and from the Civil War. The records are not that good and we don’t have the dental X-rays. We don’t have DNA samples from everybody missing and family members missing, we don’t have all 16 individuals who are missing, this really is a difficult job,” explained Mann.

Due to the conditions and elements the remains were exposed to during the last 150 years, Mann and other JPAC staff members were faced with more challenges in their attempts to identify the two sailors.

The first major step in identifying the remains was a desalination process, which removed the salt from the bones. The remains were also covered in rust, coal and sediments from the ocean, all of which have to be removed before the identification process can begin. This process alone lasted several months.

Once the bones were cleaned, Mann was able to examine the remains and establish biological profiles of the two sailors.

“From the bones and teeth, we examine them visually. I can tell the individuals age, their race, their sex, how tall they were, any kind of injuries they may have had during their life time, their oral health and any kind of distinguishing features they may have,” said Mann. “Those are the things that can help us identify them.”

The biological profiles, revealed primarily through studying the development of the teeth concluded that the sailors were both white males, one 17 to 24 years old and the other in his 30s. Both sailors stood about 5-feet-7-inches tall.

Speaking in more detail about the teeth of the older sailor, Mann said researchers found “a round spot” worn into the sailor’s bite. “It’s a little semi-circle in the top [teeth] and a semi-circle in the bottom, and you put that together and what would that be? That’s a pipe-stem groove. Back in the Civil War a lot of sailors were smoking clay pipes that were very abrasive. So they would put this clay pipe between their teeth and sit there and grind on it; and after a while it acts like sandpaper and puts a groove there in their top teeth and their bottom teeth. … We have evidence in his teeth: There’s no doubt about it, this individual smoked a pipe.”

Mann created a short list of possible identities based off of the age, race and height of the sailor’s remains, and narrowed down the identities to six possibilities by comparing them to the 14 other sailors. Because of a limited number of records and lack of dental records from the Monitor, the next step in attempting to identify the fallen sailors is DNA testing. Genealogists have been able to identify possible descendants for 10 of the 16 missing sailors.

“What we’re going to hope for is we may still find [descendants] of the other missing sailors,” said Mann. “If that happens we can get DNA samples from them, then we may be able to exclude the other 15 sailors, we may end up with a match. We may end up with one or both of these sailors [identities].”

Secretary of the Navy Ray Mabus announced Feb. 12 that the remains recovered from the Monitor were to be interred in Arlington National Cemetery on March 8. The date was chosen to honor Monitor’s role in the Battle of Hampton Roads 151 years ago. “The importance of recovering a fallen warrior is to let the nation know that the United States has made a commitment that once we’ve put someone it harm’s way, and they are either missing or killed in action, that we have a resolve to go back and return them back to their families,” said McKay.

McKay also expressed the importance of JPAC’s role to future service members, and their families and to those who are currently serving today. ”It gives the family closure, and I think it gives the war fighter a sense of comfort to know that no matter what happens, the nation has not forgotten them and will return them back home with honor,” said McKay. All 16 sailors will be memorialized on a group marker in section 46 of Arlington National Cemetery, which is between the amphitheater and the USS Maine Mast memorial.